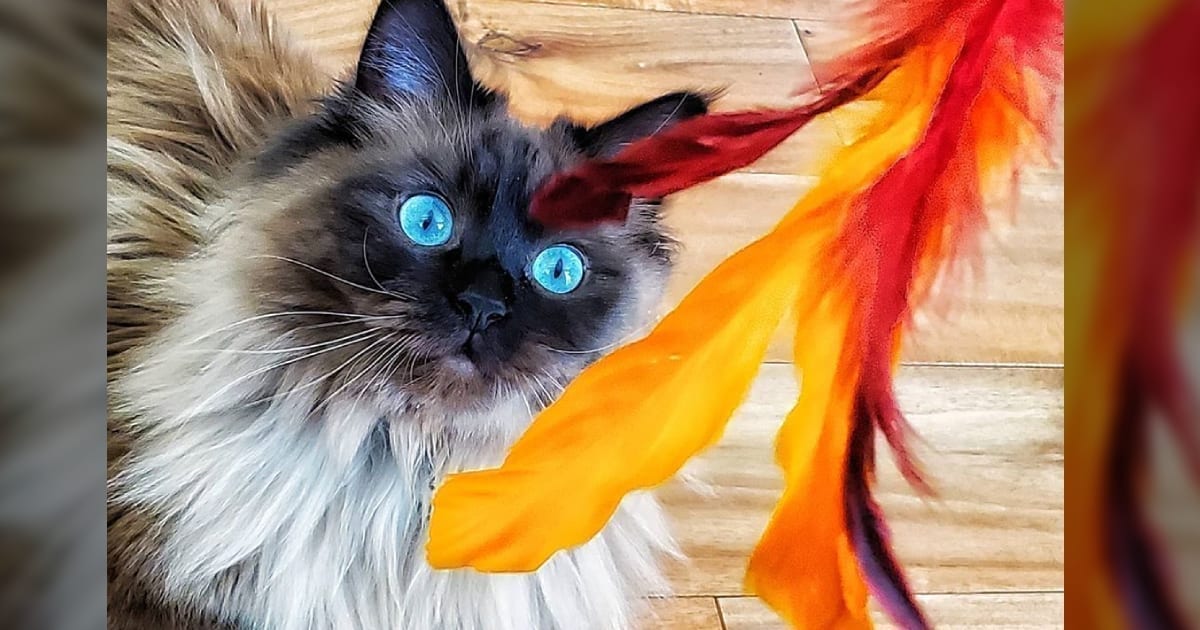 I’m on my way to nap in my chair on the porch. The sun has almost reached optimal cushion warming position and I’m quite looking forward to a doze as I just finished a play session with my favorite feathered wand toy. But before I drift off into shrimpy dreams, I thought I’d share my thoughts on wands with you.

Now, you may be thinking, whatever, wand toys for cats are all the same…a stick with a toy on a string. But no, in a cat’s eyes, the flippy end of every wand is its own unique prey for the pouncing. 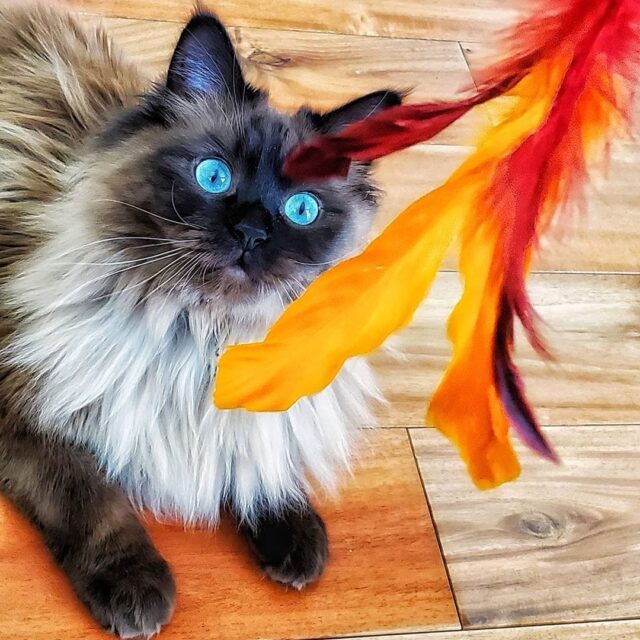 And thanks to prey preference, which is a fancy term for what a cat likes to hunt best, felines will never agree on which wand is best. Each one of us will have a different favorite. For example, I’ve mentioned my mocking bird foe in the past, so my prey preference leans toward feather toys at the end of a wand. I’ve got one those nifty full plume of feathers type of wands, and that’s a ton of fun. Until Mom drapes the feathers around me and squeals, “Forrest, you’re so glamorous in your feather boa!”

But my favorite wand is the one that has a simple tuft of feathers at the end of the string. It looks like the tail of a bird and it really trips my wildcat switch. I start thinking about that mockingbird and I just can’t help the destruction that befalls those feathers.

Though I love those feathers, I do get bored if Mom pulls out the same wand every day. To mix it up, she keeps a few around for me. There’s the one with felt ropes that feel like a mousie between my paws. Another one has ribbons that shiver and shake. Our newest wand has a string full of crinkle balls and I love it, it’s so shiny and crunchy! 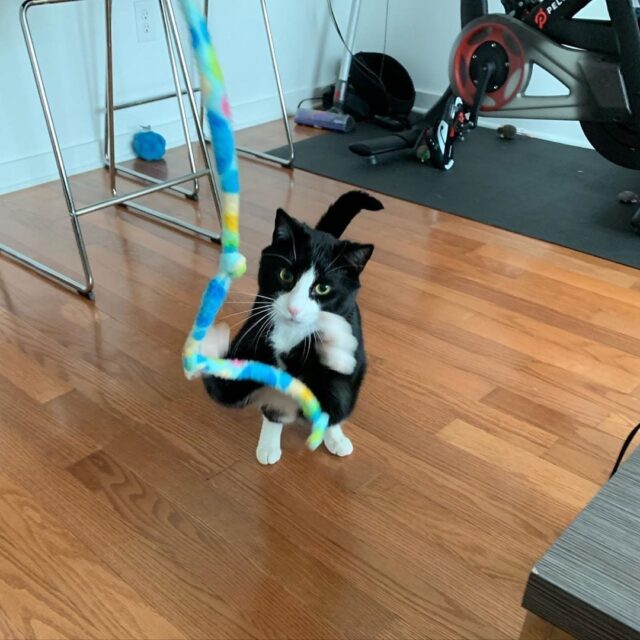 Don’t feel discouraged if your cat doesn’t like one wand toy. Think about what types of toys usually draw your cat’s interest and find a wand made of similar materials if she decides the one you have isn’t worthy. If your cat is a hunter who enjoys bringing you gifts of the hunt, consider the type of prey does she drop off. Her offerings can help you determine her prey preference for purrfect wand picking.

It might help to remember as well, cats tend to watch things a minute before jumping into action. We take a minute to warm up to new things. So, just let us take in the scene a second when introducing a new toy. Just because we aren’t pouncing, doesn’t mean we aren’t watching.

Tips for Teasing with the Cat Wand

Think about how small animals move.

Rodents scurry to get where they’re going, zigging and zagging in short bursts and often pausing in their journeys. In these stops to look about, rats and mice generally have a quivery nature about them as they sniff the air around them. During my stint at the shelter, one volunteer could make a mousie toy on a wand jiggle so good, it looked just like the real deal. 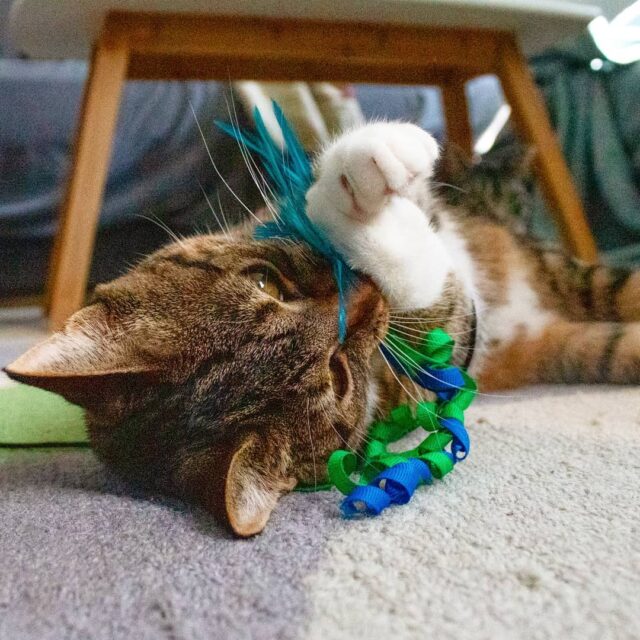 And when it comes to birds, they fly in wild patterns, but they generally wing their way smoothly through the sky. And that’s nice to watch, but let’s think about their smaller movements. When a cat hunts a bird, the winged snacks are usually hopping across the grass or even fluttering from branch to branch in the trees.

Let’s consider lizards, shall we? The stop and start of these flashy green treasures can drive a cat batty. And they can slip out of clutched paws so fast. Gone before we can scrabble to get them back. I offer a head tip to the kitties that can catch lizards every time, that’s some serious paw skills. 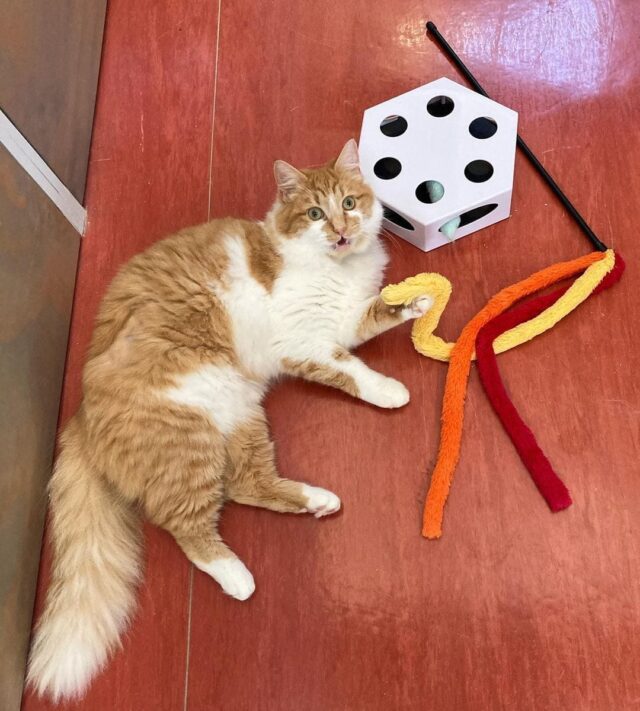 With these thoughts in mind, try to emulate the more minute movements of small prey to maximize your kitty’s interest. These smaller movements will generally pique a cat’s curiosity more than wild and thrashy swoops and arcs. Well, unless we’re talking about kittens and younger cats who enjoy a silly frolic.

But I’m an older gentleman and rather enjoy the subtle nuances of the hunt. Most senior cats would prefer you to keep the wand flicks smaller. We are generally a more reserved lot, but we still like some good play. 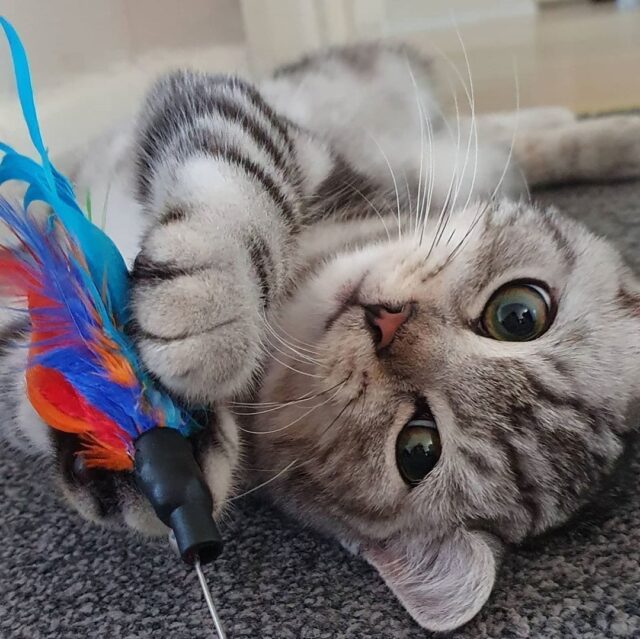 But whatever your kitty’s age, after a play session with a wand toy, snacks will be necessary.

So, don’t forget to feed the cat.