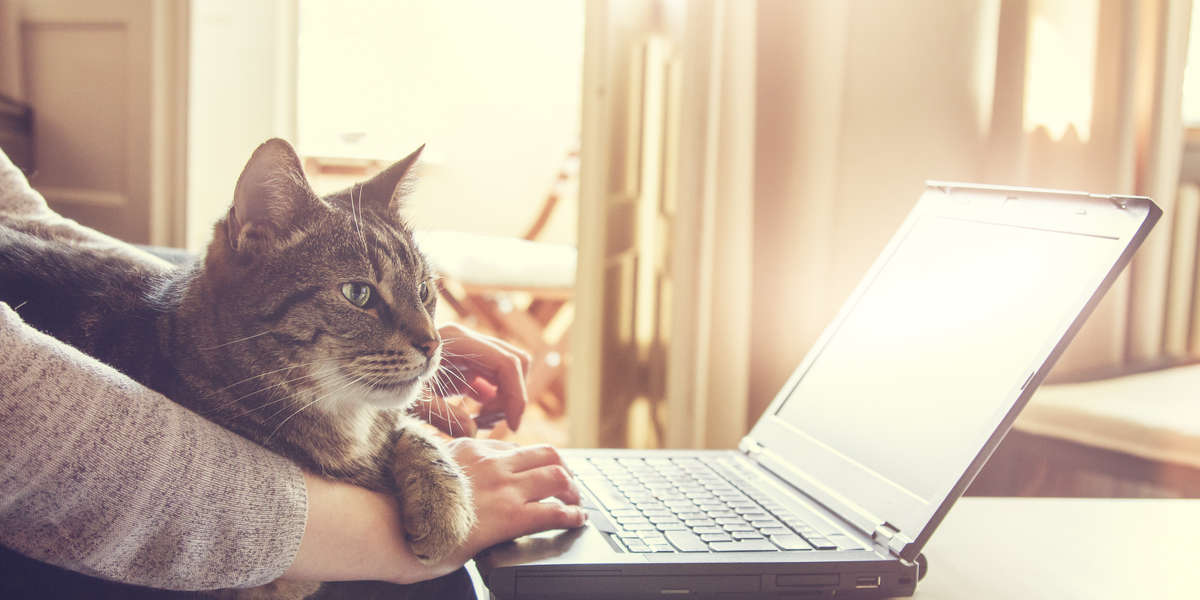 Cats could care less about important video meetings. You’re home, so it’s time to play. So if you’re trying to get some work done, but also can’t resist the siren song of your cat, here are some ways to keep them occupied until you can take a break and snuggle up.

If you look at your cat’s priority list, birds and catnip are way up at the top. You can keep them entertained for actual hours by putting up a bird feeder — especially one that suctions to the window — outside their favorite window sill. Just make sure to actually keep your cat inside, so they’ll be entertained and the birds will stay safe!

You’ve seen the way your cat chases a light reflection up a wall; their energy is unflappable. So when you have a meeting that needs your attention, set up an automatic laser pointer for them to chase around the living room. They’ll forget you’re there for as long as the laser is moving, giving you plenty of time to catch up on work.

Cats’ hunter tendencies never go away, and they’re often up for a chase. A puzzle toy usually has a trap-and-release element to it, and something with a bell will keep them interested even though they’re creating all of the movement themselves. Keep in mind: Some cats are especially crafty; you might need to hunt for tougher puzzles as they get used to the game!

Most cats want to climb, and especially right now, that climbing’s taking place indoors. Sure, you can leave them to their own devices among the kitchen cabinets, but sooner or later you’ll find a cat covered in flour. Instead, look for a sturdy cat tree as tall as your home allows. Something they can climb and scratch is a serious bonus when you’re busy in the “office.”

You’ll be blown away by how many streaming services have TV for your cats. There are shows with squirrels, birds, fish — basically any animal your cat would stop everything to watch without blinking. A quick browse on your favorite streaming app will probably pull up some cat-specific programming. If not, a nature documentary will do just fine.

Look, you probably don’t spend an afternoon hanging out in your bathroom. But if it were a little nicer, and felt homey, you’d at least consider it, right? Most litter boxes look like Tupperware with a missing lid, so why not get your cat something that feels more like a sanctuary? And while you’re at it, pick a litter that’ll make it feel like even less of a restroom. Arm & Hammer™ AbsorbX™ litter is super lightweight, absorbs wetness in seconds, and seals in odors quickly to leave hard clumps for easy scooping. So even if you don’t have room for a palatial upgrade, it’s an easy way to keep your cat’s litter box odor free.

While you can’t make work any less busy, you can make sure your cat has plenty to do during business hours — and don’t worry, they’ll have plenty of energy to play with you when you log off for the night.