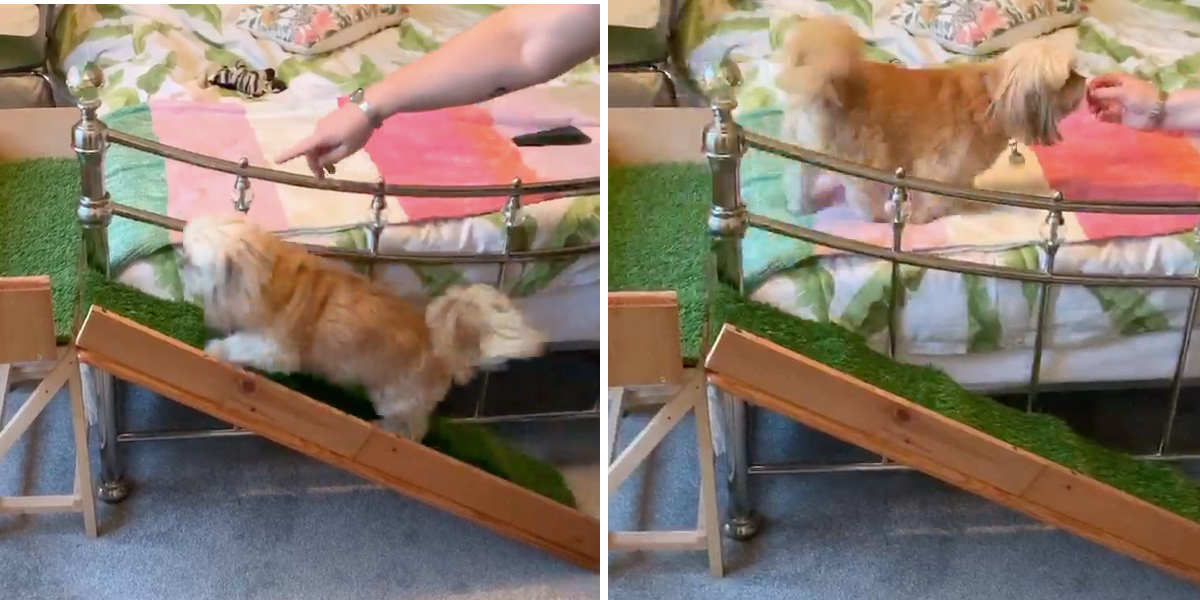 People often ask Rachel Johnson if her dog Daisy is a puppy, but the energetic Yorkshire terrier/Lhasa Apso mix is actually 10 years old.

Daisy loves going for runs along the river near her house and chasing pigeons in her garden, but her active lifestyle was interrupted a few weeks ago when she started having trouble walking.

Johnson and her dad brought Daisy to the vet, where they found out that the senior pup was starting to show her age.

“They decided to do an X-ray which showed that she’s got an issue with one of the discs in her back which was causing her pain,” Johnson told The Dodo. “I had been thinking that she might need a ramp at some point but decided that it would be better to do it now to try to prevent things from getting worse for her.”

When Daisy isn’t out and about, she can be found cuddled up on Johnson’s bed. But the jump onto the mattress has recently become a little too taxing for her.

“Daisy always sleeps on the bed with me and if I ever leave her at home on her own she always goes there,” Johnson said. “She loves to be snuggly and cozy.”

That’s when Johnson’s dad stepped in.

Having a bad hip, he knew how important it was for Daisy to have easy access to her favorite spot. And with a little ingenuity, he was able to build Daisy a custom ramp just using what he had around the house.

“Fortunately, my parents had just redecorated their bedroom so we decided to make use of some of the old furniture and the ramp was the end result,” Johnson said. “It’s made out of my mum’s old dressing table, parts of a pasting table and some fake grass that I had in the shed. It didn’t cost us a penny!”

Daisy is still getting used to using the ramp, but the sweet gesture has already cut down on her back pain. “Daisy didn’t really notice the ramp at first, she just walked past it,” Johnson said. “It wasn’t until the treats came out that she showed any interest.”

“She uses it more to get on to the bed than off,” Johnson said. “I think she forgets that it’s there.”

It’s going to take a little practice, but now Daisy has a safe way to get on and off the bed for many more years to come.